A key development in higher education over the past several decades is the growth of institutional research offices that function under the core principles of explaining what is happening now and attempting to shed light on the future. From student services, to grant requests, to accreditation, IR leaders have their hands full studying the past and present. We have found many things to learn about our institutions and found dynamic approaches to storytelling with these data. The future is another subject entirely.

In theory, we can predict a great deal by modeling past data. The American Community Survey is especially useful for this. Institutions can drill down to examine the communities they most frequently recruit from and project enrollment based on migration and internal population changes. Labor market data from groups like EMSI allow for additional analysis to suggest growth or decline in specific programs. However, variables and unknowns leave many in higher education, myself included, skeptical of anyone claiming to predict future enrollment. This Tech Tip presents an example of a specific data set that may demonstrate that forecasting remains useful despite these challenges.

At Arkansas State Mid-South, the growth or decline of our local population is an important topic, impacting the college as well as local economic development. We can take a common sense view that this trend directly impacts enrollment at our small community college, but describing that relationship through clear data is a more complicated. One area we can track is the growth or decline of the high school population we serve in our county. A significant majority of our students are from Crittenden county, Arkansas, where we are located. Moreover, concurrent high school students who take college courses on our campus, compose a sizable percentage of our student body.

Program offerings, expanded partnerships, and state support for technical initiatives are important variables here, yet the concurrent student population has remained relatively stable over the past five years compared to overall enrollment. However, the public high school population is a clearly defined pool of potential students for our college. Although such factors can impact decision making, this population is insulated from other trends that effect college enrollment. For example, fluctuations in the job market are less likely to encourage or deter their enrollment in college courses while they are still in high school.

Using data from the Arkansas Department of Education Data Center, available back to 2004-05, we can forecast the next seven years of enrollment totals for 9th-12th grade in Crittenden County. This includes data for the three area public high schools combined with the 9th grade population of other public/magnet schools. We then use 2nd-5th grade enrollment to establish a correlation between the population of the elementary group and the enrollment number for the year that group enters 9th-12th grade.

These grade ranges were chosen to generate the strongest possible statistical correlation between the elementary and high school population by working with the largest combined number of students and most sample pairs reasonable. The results of linear regression analysis suggest that 2nd-5th grade enrollment is highly predictive based on the sample pairs available (p-value < .01).

I’ve used the 2014-2019 school averages as a reference point. The mean for that period is exactly equal to the 2017-18 enrollment number. In the two years since, 9th-12th grade enrollment in the county has decreased 3.19%. The forecast anticipates a further 4.81% decline over the next seven years.

Of course, this decline represents a lower number of recent high school graduates, another population key to college enrollments. The forecast also suggests a gradual impact on the institution. However, the consequences of declining senior classes on the adult population builds over time and, in turn, linger even if high school enrollment increases.

In a given academic year approximately 20% of these high school students take classes at the college. While these start in 10th grade, working with a four year range lowers the margin of error while including the 9th grade students who would be recruited as potential concurrent students for classes in the following fall. By isolating a population that plays a key role in the college’s enrollment, and bringing a significant amount of data to bear for each year forecasted, we can reduce some of the volatility inherent in enrollment forecasting. The projections in the 9-12th grade column from 2020-21 onward were created using a fairly simple, in terms of statistical analysis, linear projection that can be calculated in SPSS, an open-source product like PSPP, or using other free online resources. By taking steps to identify a strong and logically sound correlation, we can accomplish a great deal with fundamental concepts. 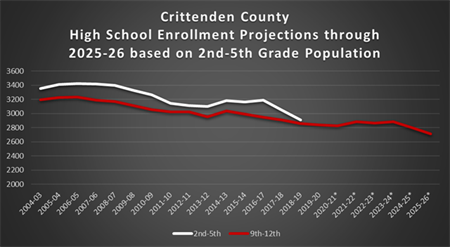 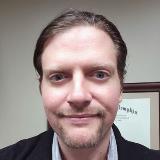 Michael Lejman is the Associate Vice Chancellor for Institutional Research and Effectiveness at Arkansas State University Mid-South. He holds a Ph.D. in history, which he taught before becoming a specialist in data science, accreditation, and higher ed policy.