AIR partnered with the National Association of System Heads (NASH) to conduct research funded by the Bill & Melinda Gates Foundation to examine public system/campus roles in institutional research. NASH coordinated the project and AIR assisted with the development and administration of two surveys—one for system IR offices and one for campus IR offices—with the guidance of a national advisory committee. Both surveys addressed the organizational structure and major functions of IR offices, as well as how systems and campuses collect and exchange data.

Data were collected from July to October 2013 using surveys of over 100 questions delivered electronically to senior IR professionals at 48 systems and 361 campuses in the United States. Survey responses were received from 73% of systems and 45% of campuses. 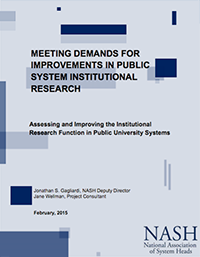